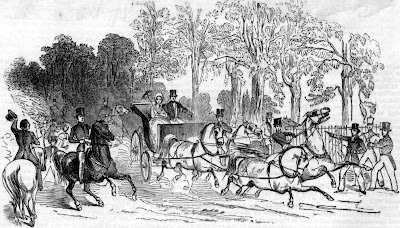 John Francis was an out-of-work carpenter aged 19 when he became famous throughout the land.  He was the son of a Welshman who had worked at the Theatre Royal as a stage carpenter for more than twenty years.  His mother came from Somerset and, like her husband, had come to London in the difficult depression years following the end of the Napoleonic war.  John had been apprenticed to his father, but fell out with his parents whilst still a journeyman and moved out to live in cheap accommodation near to Oxford Street.

John grew disillusioned with his occupation, feeling the pay was not adequate for the long hours, and frequently quarrelled with his employers.  He found it increasingly hard to get work and soon fell behind with his rent.  Like Edward Oxford, he felt he was worth more than his lowly status, and one day arranged to rent a shop to become a tobacconist.  He obtained stock on credit and opened a few days later.  To alleviate his financial difficulties he stole some money from his room mate, but his landlord soon discovered the theft and threw him out, while his supplier took away the stock after no payment was forthcoming.

With his last coins he bought a pistol from a  pawnbroker and followed the trail blazed by Edward Oxford.  But on his first attempt the gun failed to go off, although he managed to escape.  Queen Victoria bravely agreed with Sir Robert Peel that she would go out again in an open carriage the next day, whilst Peel deployed numerous plain-clothes policemen in the royal parks.  Sure enough, John Francis was on station in Constitution Hill and this time the gun fired.  Victoria again escaped injury, and John was taken into custody.

This time the accused was poorly defended, and he was found guilty of high treason and sentenced to be drawn, hung and quartered.  In medieval times the words were in a different order and involved hanging by the neck, but not until dead, and while still alive having ones intestines drawn out and being castrated, before being finished off with an axe and cut into four pieces.  The slightly more humane nineteenth century version included being drawn to the place of execution on a hurdle, hanged on a scaffold until dead, and then quartered and disposed off as Her Majesty saw fit.


John Francis anguished in solitary confinement until less than 48 hours before his public execution in front of a baying mob when, in response to impassioned petitions for mercy from his parents and others, the sentence was commuted to transportation for life.  He was taken to a prison hulk at Portsmouth and then sent with 239 other convicts in the hold of a sailing ship on a four-month journey to Van Dieman's Land.  There he was committed to Port Arthur convict settlement, the 'most penal' that the colony had to offer.  John later described the place as an ‘abyss of wretchedness and misery’.  Along with other horrors, ‘unnatural crime’ was widespread and John was a handsome boy.


After 4 years he was removed from the labour camps and put out to work for various settlers in Launceston in central Tasmania, where he resumed work as a carpenter and gained skills as a general builder.  He married and prospered in his trade, and14 years after his trial received a conditional pardon.  His abilities were valued in the community and in 1860 he won the contract to build the Launceston General Hospital at a cost of £10,122.  But a few years later an economic depression set in and work dried up, and John decided to move to Melbourne with his wife and 9 children.  Although he continued to work as a builder, he never again gained the same prosperity, and he died of TB in 1885.


The 12,000-word chapter in the book provides the whole story, including the horrific details of the voyage to Australia and what life was actually like in the infamous Port Arthur labour camp.

Sources used in the full account in the book

Sources used in this and other chapters