A Pattern of Virtue 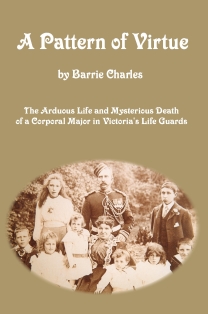 A Pattern of Every Soldierly Virtue ...

So said Lord Longford, and so it read on his gravestone after his mysterious death. ''It is difficult to speak highly enough of the merits of this man,' echoed Colonel Anstruther Thomson. Yet he was born in poverty in a tiny village in Hertfordshire and, like many in Victorian times, had to struggle to survive. William Silwood, however, was hard working and had the strength of character to rise above his roots to finally gain the highest rank for a non-commissioned officer.

But this book is not just a biography of a soldier in the 2nd Lifeguards. Rather it is a social history of the times from William’s birth in 1863 to his death in 1909, sketching what life was like during that period for an ordinary citizen. It also looks beyond, to consider the background of his parents and describe the environment for his wife and children in late Victorian and early Edwardian times.

Based on extensive research, this biography sets in stark contrast the privations faced by our ancestors with the easy life of today. It is also a personal story, tracing William Silwood’s life from humble beginnings, through his fortunes as a soldier of the Queen in peace and war, to his final days as a keeper in  and the repercussions from his sudden and violent death.

William Silwood was my great grandfather and one of the most interesting of my ancestors. Initially all that I knew of him were a few photographs and some family stories that he had been in Queen 's bodyguard and was later murdered in .

I spent a year researching his life and times to build up a picture of the man using army service records, civil registration certificates, census records, newspaper reports and many original documents from the Boer War and other periods held at the National Archives. By the end I felt I knew the man and how his family probably felt during the 50 years or so that the book spans.

Sunday 1st November 2009 marked the centenary of this long forgotten scandal in .  On that date in 1909, William Silwood died while out on his rounds patrolling the forest as a forest keeper.  Many believe he was murdered.  Silwood was an ex-Guardsman, a strongly built man, who had been decorated for bravery in the Boer War.  He left a widow and nine children.

But the circumstances of his death were not clear cut, and the inquest returned an open verdict.  The police did little and nobody was apprehended for his murder, although the event and its aftermath took up numerous column inches in the local papers and was hotly debated amongst the populace.  The funeral in Loughton was a spectacular affair with a large military escort and the procession was watched by thousands of onlookers.

William Silwood is the subject of the biography 'A Pattern of Virtue' and I, as one of his great grandsons, led a walk on the anniversary of that fateful day.  The walk started on the minute of his departure one hundred years earlier from Keeper’s Cottage in ’s Hill and progressed to the place he died.

Around two dozen people attended the walk, many of them William's descendants, and I am most grateful to the current head forest keeper, Keith French, for his support on the day.

An article on this story appeared in Who Do You Think You Are magazine in 2010.  Seven years later I was contacted by a reader who had just discovered the article.  Much to my surprise, she said that it was well known in her husband's family that his great grandfather and brothers had been the ones who had killed William Silwood!

It would appear that his killer was Frederick Thompson or one of his eight brothers.  Frederick was born in 1867 and died in 1922.  After the death of William Silwood they moved quickly from the local area to settle in the East End of London.