Karma and the Helpful Hand 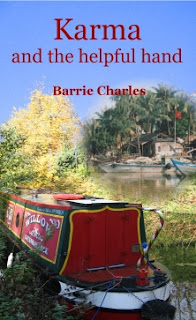 In this unusual crime novel, the action alternates between England and Vietnam in the 1960s and 70s. Paul, an erstwhile green activist, is going through a rough patch after the loss of his job, his long-term partner and some of his ideals. Following the sudden disappearance of his wealthy brother-in-law, Robert, he reluctantly agrees to help his sister try and discover what's become of him. Gradually Paul becomes caught up in an investigation into Robert's past and a relationship with Susanna, a director at Robert's firm.

Thirty-five years earlier, Bien enjoys an innocent childhood growing up in a village in South Vietnam, while his parents and relations cope with the problems of war. Meanwhile, Mike O' Connell, an American journalist, becomes increasingly disillusioned as he chronicles the horror and futility of the conflict.

We are all prisoners of our past and our actions influence the flow of the future - the Karma of the title. Slowly the connection between the two stories becomes apparent and Bien, O'Connell and modern Vietnam all put in an appearance before the final dramatic resolution.

Vietnam featured prominently in my youth when, as a naive student, I protested in Grosvenor Square, and then, as a slightly more mature traveller in the early 1970s, visited war-torn Laos and talked to American GIs on R&R in Thailand. Shortly after my wife taught Cambodian and other students in the sanctuary of Australia, whilst, much later in 2001, I finally went to Vietnam itself and saw more of the view from the other side in what they call the American War. This gave me a huge admiration for the Vietnamese people.

I have always preferred plot-driven fiction and a crime novel gave me the opportunity to test my skills whilst writing about things that deeply interested me. Starting with a rough idea of what the crime was and who did it, I started by defining the characters and then letting them drive the narrative. The result was a hugely enjoyable succession of three winters as I lived with my protagonists and followed them through to the final scene.