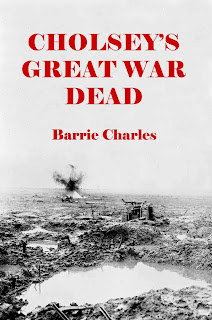 Cholsey's Great War Dead provides the information for the village's centenary remembrance of that terrible war.  For each of the fallen in the period 1914-18, a remembrance ceremony is held exactly 100 years later.


The research for Crime and Calamity in Cholsey: Life in a Berkshire Village 1819-1919, provided a lot of information about the Great War dead immortalised in the memorial in St Mary’s church.  Not all of the names made it into the published book, but I thought the information would be of interest to village historians and those involved in the annual Armistice Day remembrance services.

I have identified most of the names with little chance of ambiguity, but there are a few where I have been unable to find a suitable person with a connection to Cholsey.  All 41 names are listed in the book, and I have marked the six who remain to be identified.  Note that there is also a roll of honour in the Free Church, which has 34 of the same names, but five of the unknowns are not listed (Broadbridge, Chapman, Giles, Harwood and Marshall) and the two Hansens are missing.  A third memorial plaque, which now resides in the New Pavilion, has all 41 names, but mistakes have been made over some of their initials and the order is not strictly alphabetical!

In addition to these war dead, I have added a further 20 men who had a connection with Cholsey, but for some reason did not make it onto the church memorial.  They may have been born in the parish and moved away, or have parents or a spouse who ended up living in the village.  Also added are the six service patients from Fair Mile Hospital who are buried in the churchyard.

Those included in the book